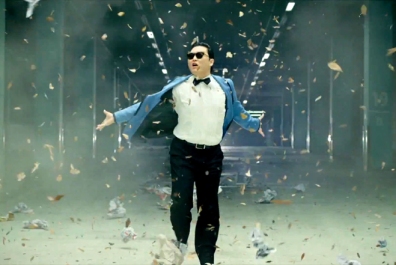 South Korean pop sensation PSY’s comeback with “Gangnam Style” has been nothing short of remarkable, as viral spoofs of his recent hit are taking the Internet by storm.

The best part: A lot of those parodies — like this one by the U.S. Naval Academy — are really good, and just as addicting as the original. So when we came across this high school teacher’s performance, we just couldn’t resist sharing. He even looks like PSY.

Mr. Ko is a teacher at Murrieta Mesa High School in California and took to the gym floor with this incredible performance to “Gangnam Style” for the school’s first pep rally of the year. From what we can gather on the school’s website, Hyun “Teddy” Ko teaches Geometry and Algebra I — wish your math teacher were this cool?

Check out his showstopper in the video above (there’s a raw version below). We think his moves could arguably rival PSY’s, and he definitely out-dances his backup — but comments on the YouTube video tell us that the cheerleaders only had that morning to rehearse, so we’ll cut them a little slack.

Ko has taught math for 11 years, is a graduate of the University of California, Los Angeles, and “his purpose on earth is to make sure all of his students receive incredibly awesome mathematics instruction.”

So, kids, take it from America’s very own PSY — or the California teacher who looks like him and has sweet steps — those who know math are cool.

Who Is Sabotaging Our Schools?

I had a friend, years ago, who interned for a now famous “investigative” TV reporter. The reporter was putting together a story about people freezing to death in their New York City apartments because their landlords had failed to fix broken furnaces and he asked all the interns to find as many such people as they could. My friend was ambitious and worked hard to find three. The reporter took the information, thanked him and promised him a successful career in the news business, and then said, “Now make sure they don’t get their heat fixed before we shoot.”

My friend didn’t think so — though he wasn’t exactly sure what he was supposed to do to keep those people in the cold.

I was pretty sure it was meant as a joke — but now, after more than two decades as an urban public school teacher I find that differentiating irony from cynicism is almost never a sure thing.

And I wonder who benefits from a failing education system — and how far they are willing to go to maintain that failure.

Let me qualify that–so I don’t beg the question. The system is not failing all children and not all schools are failing most of their students. However, many inner-city schools are struggling and most of those students are not being well-served. There are external factors that influence this failure but since education may be the only hope for many of these children it is morally indefensible not to assume the burden of improving their education.

So who benefits from a failing education system?

At the top of the list would have to be those who can appropriate funding with the promise of ending that failure.

Not far behind them are those who wish to defund public education for whatever reason — lowering taxes, etc.

Other beneficiaries of inadequate schools:

Drug dealers whose customer base comes largely from the ignorant, the disenfranchised and disempowered unreached by public education

Prisons, public and private which get their customers from the same misery

Industries that want a large pool of semi-educated workers who have no other employment options.

And yet none of the above interests has ever disrupted my class. None has ever failed to order me enough text books or complied with class-size averages by giving me a class of 25 followed by a class of 55.

No, it is those whose job is to support teachers who seem to be the saboteurs.

I remember when I thought that students were the great impediment to learning. All the baggage of their unstable lives, their short attention span that just keeps eroding, their relentless needs mixed up with their in ability to delay gratification. But I don’t believe that anymore. I’ve seen too many students overcome all those things. I’ve seen the miracle of their potential and what can happen if enough of us believe in them.

But nothing as important as counting their heads or bringing them to the office in the middle of class to fix their student records or making an announcement over the loud-speaker.

Our school once had an office tech who sent a student to my classroom to get another student — and on the office summons it said: “bring that green nail polish.” The same tech and her supervisor used to cook in the office and and fix each other’s hair sometimes. They once blew out the fuses and left us all in darkness the rest of the day when they plugged in the crock pot and the hair press at the same time.

And why should they believe that what goes on in any of our classrooms is worth respecting?
The larger system doesn’t.

It has so profoundly confused outcomes (students actually learning something meaningful and useful) with measurements (standardized tests). It warehouses students and expects them to learn. It provides us with badly written text books and curricula written by people who don’t know how to teach. It wastes money when it has a surplus, then increases class size and shortens the school year when the money is short.

This past year, the school district in which I attempt to teach each day slashed its budget in response to state funding cuts. As a result, one of the best teachers in my school–dedicated, talented, inspiring–was terminated. Over the summer another school in the same district was allowed to hire him back as a long-term substitute and them give him a contract, converting an allegedly necessary termination into a transfer. So now a teacher who had helped build a department and establish credibility and trust with students was shuffled around along with at least one other teacher (the one who was sent to take his place). The first day of school this fall another teacher showed up at our school. He had been bumped from his position at another school but without anywhere else to go in the district. He was still under contract and so the district sent him to us but with no certainty how long. By weeks end, our school was host to two other “pool teachers.” They are still with us. Our principal tries to find things for them to do. Meanwhile, there are classrooms in our city so overcrowded that children have to stand or sit on the floor while other classrooms sit empty with no teacher.

I would like to tell you that this an ironic joke. It has to be, right? The people running our schools cannot be that callous or that stupid–or that helpless to oppose the callousness and stupidity of the system.

Geology of the Mountains of Madness

By David Bressan ]…we expected to unearth a quite unprecedented amount of material – especially in the pre-Cambrian strata of which so narrow a range of antarctic specimens had previously been secured. We wished also to obtain as great as possible a variety of the upper fossiliferous rocks, since the primal life history of this […]

An anthropological approach to all things geek

I Remember You Well

Things were happening... and I remember there was music playing.

This is the place to come for your daily rant about life in the public school system!

Raising the energy level of my physics classes

Data and thoughts on public and private school funding in the U.S.

endless thinking about math and school (and art)

thoughts on education by Grant Wiggins

On an e-Journey with Generation Y

Immersing technology in the classroom and beyond into the globe!

How do people understand computing, and how can we improve that understanding?

A site to discuss better education for all

Reflections on the dynamics of teaching

Thoughts on Literacy & Leadership in Education

Education as it should be - passion-based.